Hiragana is one of two Japanese alphabets – it consists of 46 charters and it is used for the phonetic transcription of Japanese writing. In simple terms, it works as our Latin script – the characters do NOT carry any meaning, but only a visual form of a particular sound. The same works for katakana which we are going to cover next time. The difference however between these two alphabets is when to use one of them.

Hiragana, together with katakana make up an alphabetical system of mostly syllables that is commonly known as kana.

In previous article WRITTEN JAPANESE we showed you visual differences between all three components of Japanese writing system – you could compare three samples of kanji, hiragana and katakana. This time you can have a look at whole hiragana alphabet – starting in order with first 5 vowels A, I, U, E, O and finishing with the only Japanese consonant N.

These 10 lines (or columns, if you want) are essential for a survival of any student of Japanese. Step by step we will show you some pretty neat „tricks“, so that you can become fluent in reading and writing complex hiragana – including long vowels (o -> ō), gemination (shikke) and palatalization (Kyōto). 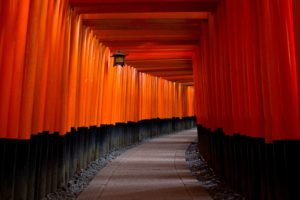